Luis Suarez celebrates after scoring for Barcelona
Luis Suarez scored a hat-trick, including an exquisite second goal, as Barcelona strolled into the Club World Cup final with a 3-0 win over Asian champions Guangzhou Evergrande on Thursday.

Guangzhou gave the European champions a couple of scares in the first half but the Chinese side were utterly outclassed by the end of a match that often resembled an attack-versus-defence training session.

Zou Zheng also suffered a horrific injury in the first half, appearing to break his leg as he fell awkwardly to the clear distress of his team mates.

Even without Lionel Messi, who was taken ill just hours before the game, and the injured Neymar, Barca enjoyed more than 70 percent of possession as they claimed a place in the final against South American champions River Plate.

It was Guangzhou's first defeat under Brazilian coach Luiz Felipe Scolari who took over in June. 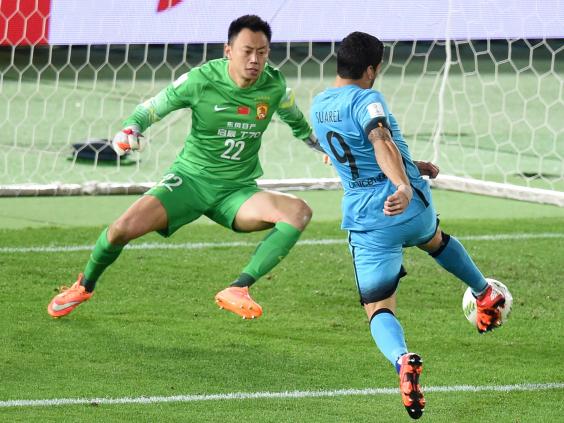 Barca needed 39 minutes to break down the defence, Suarez pouncing to tuck in the rebound after goalkeeper Li Shaui failed to hold Ivan Rakitic's long-range drive.

The Catalans had a lucky escape just before that when Brazilian Elkesen just failed to make contact with Zheng Zhi's cross.

Javier Mascherano also twice made last-ditch tackles to prevent Guangzhou players having a clear run at goal, firstly on Ricardo Goulart and then Zheng Zhi, while Claudio Bravo made his only save just before halftime to tip away Elkesen's header.

The game was settled as a contest after 49 minutes when Andres Iniesta sent a beautifully-weighted pass into the area and Suarez caught it on his chest before volleying past Li in one movement.

The Uruguayan completed his hat-trick by converting a penalty in the 67th minute.