Brazil 2-1 Colombia: Neymar on target to give Selecao hard-earned victory

The hosts made it two wins from two under new coach Tite thanks to the Barcelona star, who struck after Miranda's early header had been cancelled out by a Marquinhos own goal
Neymar was the hero for Brazil as the home side overcame Colombia 2-1 in World Cup qualifying on Tuesday.

The 24-year-old, fresh off guiding Brazil to gold at the Olympic Games in Rio, netted the match-winner with 16 minutes remaining in Manaus.

Brazil had a dream start after Miranda opened the scoring in the second minute at the Arena da Amazonia.

The Inter defender headed the home side into the lead courtesy of Neymar's early corner, but Colombia struck back in the first half.

It was not a Colombia player who found the net, however, with Marquinhos putting the ball past his own goalkeeper Alisson from a teasing James Rodriguez cross.

But it was Brazil who came out on top, with Neymar firing home a low strike after being set up by Liverpool attacker Philippe Coutinho.

The win put Brazil up to second in the CONMEBOL standings, equal on points with Argentina and one behind leaders Uruguay after eight games.

Brazil coach Tite went in unchanged from his first game at the helm - a 3-0 win away to Ecuador last Friday.

The Brazilians got off to an ideal start, with Miranda heading in a Neymar cross in just the second minute of the match. 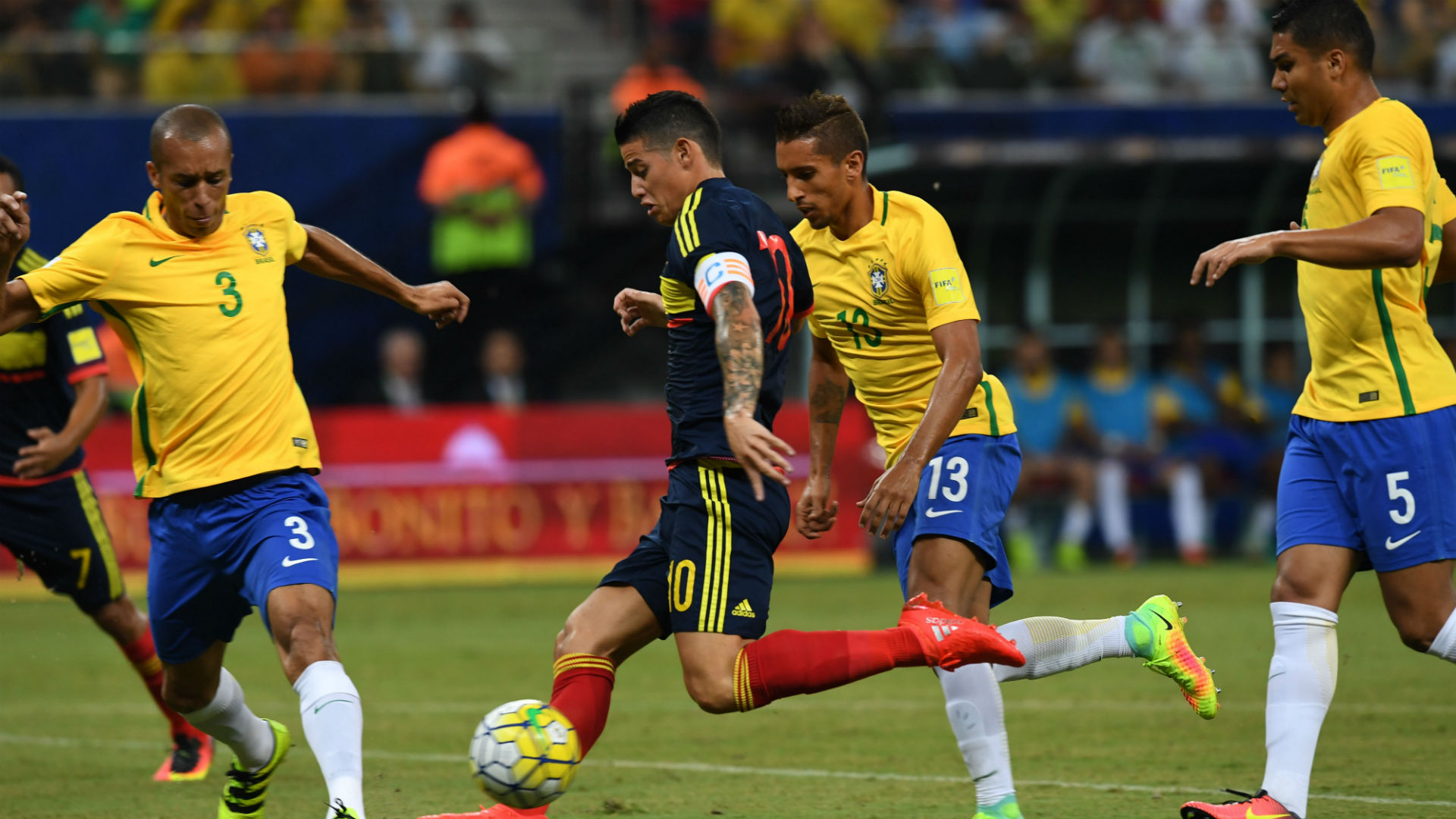 Neymar had the chance to double the lead with a free-kick in the 14th minute but saw his effort sail harmlessly over the bar.

Real Madrid full-back Marcelo made a great run and produced a sublime turn before firing away a shot, but he was off balance as he hit the ball, seeing his strike flash wide.

Colombia keeper David Ospina was rather untroubled inside the opening half-hour, however, he had to be alert as Brazil began to assert their dominance.

The Arsenal shot-stopper first saved a Casemiro strike from distance, before denying Neymar from close range a minute later.

Brazil did eventually put the ball in the back of the net in the 33rd minute after Paulinho guided Neymar's pass home, but he did it illegally - the referee handing him a yellow for a blatant handball.

The home side were made to pay for their inability to convert chances, with James' dangerous free-kick floating off Marquinhos' head and into his own net to level proceedings.

Marquinhos' own goal was the first Brazil have conceded in World Cup qualifying since Gilberto Silva's effort against Uruguay in a 3-3 draw all the way back in 2003.

Brazil almost responded immediately through Neymar, but the Barcelona star was once again denied by Ospina as the score remained level at the break.

The first real chance of the second period fell Colombia's way with Carlos Bacca setting up Luis Muriel, but the forward's shot flew into the side netting.

It was a much tighter affair in the second 45, with both sides failing to muster any real opportunities on goal.

That was until Neymar was found by second-half substitute Coutinho, his low shot beating Ospina for the match winner.