The coronavirus patient quarantined at the Infectious Disease Hospital in Yaba, Lagos, attempted to escape from the facility on Friday, according to PUNCH.

The patient, an Italian, was confirmed to have the virus on Friday morning, three days after he arrived in the country. He flew in from Milan, Italy, into Lagos before heading to Ogun state where he first showed symptoms of the disease.

The newspaper quoted a health worker at the hospital as saying the patient threatened to escape quarantine over the alleged poor state of the medical facility.

“The patient complained about excessive heat and presence of mosquitoes at the hospital,” the health official reportedly said.

[The hospital where the patient is kept]

“The patient wanted to run away yesterday (Friday). The Italian man, who seems to be an engineer, was very angry that the room where he was kept was very hot. The only thing demarcating the room from other rooms in the ward is a red and white barricade tape. That is where the Italian man that tested positive to coronavirus is kept.

“There is no single equipment inside that place. It is just like any other regular hospital room with a bed. That building you see that is being repainted is the original place meant to quarantine coronavirus patients.

“As you can see, the place is not ready. The state government is just renovating it, despite the fact that the virus started spreading since December 2019. It is really sad that a country like Nigeria is never ready to medically contain infectious disease outbreak.”

When approached, a health worker said not to have worn any personal protective equipment required for the nature of the disease being treated, reportedly said: “What is coronavirus? Gloves and face masks cannot do anything. We have been working here for years with people that have deadly diseases. At last, all of us will die.” 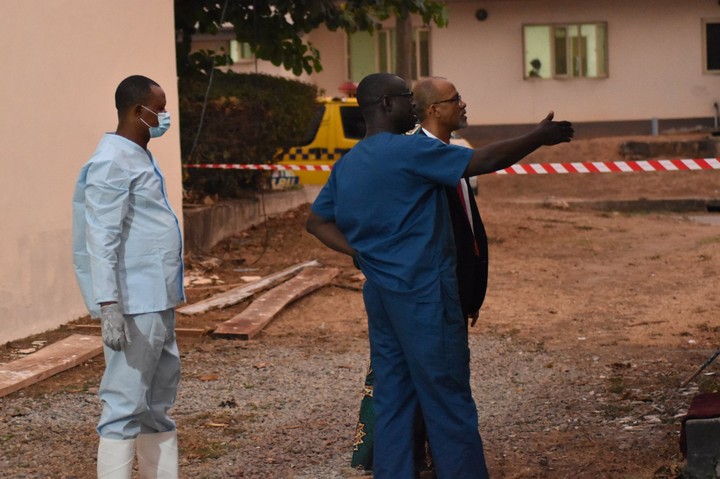 On Friday, Obafemi Hamzat, deputy governor of Lagos, had said the facility, with a 100-bed capacity, was well equipped for containing the disease.

He said the patient was receiving adequate treatment and was responding well.

“The good thing is that he was brought in yesterday morning and within four hours, he had been diagnosed, so our diagnosis tools seem to work better than we expected. Normally, it takes eight hours,” Hamzat had said on a television programme.

“He is in our biosecurity lab in Yaba. It is a lab we built that can accommodate 100 for now, but it is only one bed that is occupied today. Hopefully, it won’t spread further. We are ready, we are well equipped and he is getting better. The doctor said that he is going to be fine.”

Prior to the outbreak of the disease, the federal government assured Nigerians that it was ready to contain the virus in the event of an outbreak.