The State prosecuting counsel has blasted Oscar Pistorius' lawyer's claim that sending the athlete to jail for the murder of ex-gf Reeva Steenkamp will not serve any purpose.

In today's hearing at Pretoria High court, the defense counsel had argued that Pistorius was a broken man and even told him to walk around the court without his prosthetic legs for the judge to see the man the world wants to send to jail. But prosecuting counsel, Gerrie Nel, in a series of explosive arguments, argued that Pistorius’ culpability instead borders on dolus directus – that is, the intention to kill. 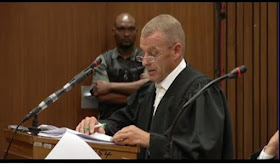 He knew the toilet cubicle was small with no escape for the person inside. He fired not one but four shots. These are all aggravating circumstances and that even if he thought it was an intruder, he armed himself with a firearm loaded with black talon ammunition and says Pistorius has never given an “acceptable explanation” of why he fired four times.

'The argument that Pistorius thought the person behind the door was an intruder does not make it a less serious crime. Does it detract from the fact that he is a murderer?'
'I won’t deal with perceptions but with facts.' Gerrie Nel, prosecuting counsel says.

'If you want to talk about a broken man, he says, let’s talk about Barry Steenkamp (Reeva's dad).'

'The defence says Pistorius has accepted the court’s findings of murder. That is not the same as accepting what he did,'
“Isn’t it time we now finally let the world see what this accused did with four black talon rounds through a door?” Nel asks.

Nel then talks about Dr Scholtz testimony of Pistorius’ anxiety and depression.

'So why did Pistorius hoard his medicine in his cell?
'Scholtz also said he should be hospitalised, Yet no steps were taken to hospitalise him.'
'It isn’t plausible to say he is remorseful'
'The only plausible explanation is that the accused armed himself with the intention to shoot.'

Nel says the court should not impose a sentence less than the minimum prescribed for murder, which is 15 years’ imprisonment saying the court doesn't start with a clean slate.

''There must be “truly convincing reasons for a different response”, he adds, reading from the regulations.

''Correctional supervision – essentially house arrest, which is what Pistorius has been under since leaving prison last October – is not even close to the punishment required here''
“Wholly suspending” a prison sentence, even in compelling circumstances, is not permitted.''
'Pity will play no role in a sentence, the court can’t be seen to condone serious crime,' he adds.
'It’s not a clean slate. The minimum sentencing is applicable.'
Justice must still be properly administered … despite an admission of forgiveness.

Forgiveness has more to do with the person forgiving than with the crime.

The deceased has done nothing wrong … She will never walk again … The accused murdered her.

Nel says he has rarely heard such devastation from a family as that relayed by Barry Steenkamp and Kim Martin in their testimony. He says the judge has a duty to ensure:

'I caused her death is not the same as I murdered her. Without that, there can be no remorse.'
'What motivated him? We don’t know.'
'I cannot think of a more excessive use of a firearm … He fired four shots that tore up the body of the deceased.'

'Is an intruder’s life not important? Did he think of that life?'

'Reeva Steenkamp disappeared in this trial', he says.
'The court should take into account “who she was … what dreams she had”.
'She is just as important as the personal circumstances of the accused … She can never walk in court.'
'The identity of the victim is irrelevant to his guilt and irrelevant to sentence.He is guilty of the murder of Reeva. He killed her.'
“There is a difference between I am very sorry Reeva is dead and I am sorry for myself that Reeva is dead,” Nel Argued.

Sentencing of Oscar Pistorius is likely to happen on Friday.