A man identified as Somchai has learnt that his no one to mess with the hard way after his wife took a revenge on him for having an affair with her friend.

After finding out about the affair the offended woman managed to lure her husband feigning she wanted to have sex with him and removed his trousers.

And when he just relaxed, she put her evil plan into action, she produced a box cutter and slashed his manhood almost severing it. 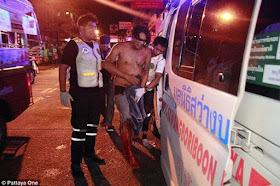