An ancient mummy which is surrounded by skulls has been discovered as a 3,500-year-old tomb is opened for the first time.

An ancient 3,500-year-old Egyptian mummy surrounded by skulls and bones has been discovered in the southern city of Luxor.

The timeworn corpse was found with 450 dusty statues, haunting painted funeral masks and wooden coffin fragments in one of two new tombs.

Believed to belong to a noble or important official, the well-preserved corpse has left archaeologists on the west bank of the Nile with more questions than answers. 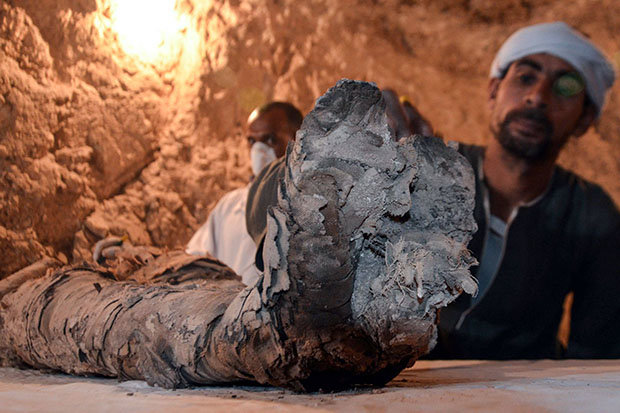 The strange artefacts could be the first of many more surprises unveiled, with more exploring and digs to come.

One tomb has a courtyard lined with mud-brick ad stone walls and contains a six-meter burial shaft leading to four side chambers.

Wall inscriptions and paintings inside point toward the find belonging to the era between the rings of King Amenhotep II and King Thutmose IV, 18th dynasty pharaohs.

The other tomb has five entrances and a rectangular hall with paired burial shafts on both the northern and southern sides. 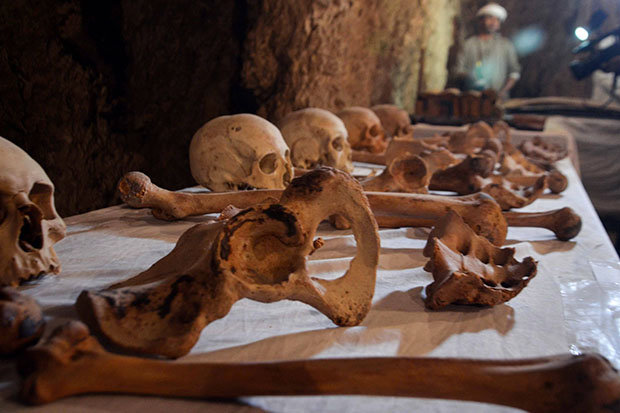 Funerary cones, clay vessels, and a cartouche – a representative carving detailing the reign of King Thutmose I, all complement the exciting mummy discovery in the first tomb.

Since the beginning of 2017 several new finds have been unveiled across numerous provinces in Egypt.

One of these was the tomb of a royal goldsmith who’s craft was dedicated to ancient Egyptian god Amun that belongs to the same era as the two discovered this week.