It looks like Tacha’s staunch supporters are now deserting her following her disqualification from the Big Brother Naija reality show.

Recall that Tacha was disqualified for physical violence during a fight with fellow housemate, Mercy. Mercy, on the other hand, was issued two strikes by Big Brother for not stepping away from a volatile situation.

In the latest development, Jaruma who has been a strong force behind Tacha has deleted all Tacha’s photos after her disqualification last night.

Meanwhile, a Twitter user with the handle @Queeninthewest1 while reacting to Tacha’s disqualification has mocked Jaruma for bringing bad luck to anyone she has supported in the past. 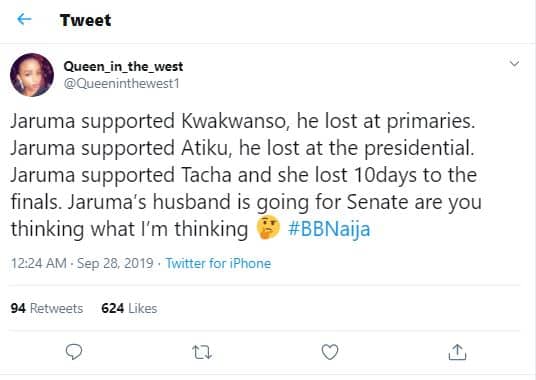